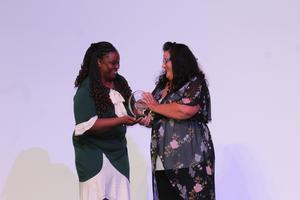 The awards ceremony was held at the District’s newly constructed performing arts center and featured speakers from the District’s executive cabinet, as well as performances from talented student musicians at Banning High School.
Several certificated and classified staff received Employee of the Year awards, including staff who have served the District for more than two decades. Awardees such as Hilda Scott, classified employee at Coombs Alternative Education with 28 years of service, and Lisa Mata, teacher at Nicolet Middle School with 16 years of service, received an engraved glass trophy as an acknowledgement of their commitment to the students of Banning Unified.
In addition to recognizing long-time employees, Banning Unified also celebrated retiring employees, including Linda Sanchez, custodian for Central Elementary School and the District Office. Sanchez is retiring after 27 years at Banning Unified.
“The Banning Unified community is very fortunate to be backed by a talented, loyal group of educators and professionals who have supported our schools and students for many years,” Superintendent Terrence Davis said. “It is a privilege to recognize them for their accomplishments, and we look forward to the many great contributions from our employees in the next school year.”