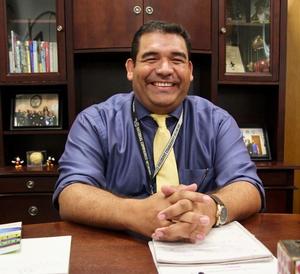 Banning Unified School District has selected Dr. Ricky Anderson, an enthusiastic educator and administrator with a long-standing passion for leading in education, to take the helm as Cabazon Elementary School’s principal.

Banning Unified School District has selected Dr. Ricky Anderson, an enthusiastic educator and administrator, with a long-standing passion for leading in education, to take the helm as Cabazon Elementary School’s principal.

After graduating high school, Anderson began his career working at school campuses as a custodian and undertaking yard duty while earning his teaching credential at the University of Redlands. Later, he received his administrative service credentials at Concordia University Irvine. For the next 15 years, Anderson served as an elementary school teacher and an instructional coach in Rialto and Redlands school districts.

Pursuing his dream of working in administration, Anderson journeyed to Coachella Valley and later Lucerne Valley, working as an assistant principal for two years and then as principal for Lucerne Valley Elementary School – a position he held for the past two years. While honing his role as principal, he studied at his alma mater and received his doctorate in education in May 2022.

“I am excited to work alongside the Board of Trustees, Superintendent Terrence Davis, and the remarkable teachers, staff, and families at Cabazon,” Anderson said. “Stepping foot onto campus, I instantly felt the magnetic and family-oriented energy within the school community. The time is now to build upon my predecessor, Principal Johnny Baker’s foundation, and showcase all the great things happening at Cabazon Elementary.”

Cabazon Elementary School held its Back to School Night on Aug. 9, allowing parents to meet Anderson and familiarize themselves with their children’s teachers and classrooms.

“We are delighted to have Dr. Anderson join the Banning Unified and Cabazon family,” Davis said. “Dr. Anderson exemplifies all of the qualities our District expects from its administrative team, striving to prepare, inspire and educate our students to achieve their highest potential.”