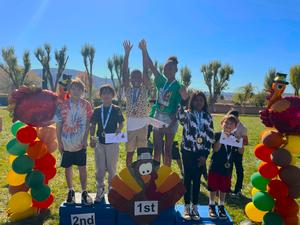 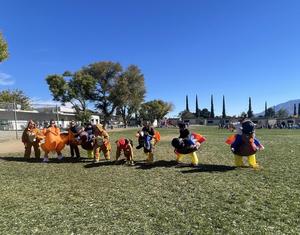 The holiday spirit was in high gear as Hemmerling Elementary School continued its decades-old tradition of celebrating its fastest students during the 73rd annual Turkey Trot race, held Nov. 18.

The holiday spirit was in high gear as Hemmerling Elementary School continued its decades-old tradition of celebrating its fastest students during the 73rd annual Turkey Trot race, held Nov. 18. Nearly 150 Hemmerling K-5 students participated in the Turkey Trot, with the first-place winners receiving a gift certificate for a free turkey, while the runners-up received grocery store gift cards.

Amid Thanksgiving décor provided by the Hemmerling Sunshine Committee and entertainment from the Banning High School drum corps, Turkey Trot competitors were cheered on by Hemmerling students, staff and parents.

Divided into separate races for boys and girls, there were 12 hard-fought competitions, with K-2 students running one lap around the field and students in grades 3-5 running two laps. The top three runners from each race were celebrated during the Turkey Trot awards ceremony and received medals.

Hemmerling fifth-grader Jacob P. exemplified the spirit of the games with an act of sportsmanship that delighted onlookers, stopping to help a classmate, Sean G., get back on his feet after falling. Jacob P. then completed a third-place finish and a trip to the winners podium, while Sean G., never giving up, finished in fourth place.

After the main races had concluded, members of the Hemmerling faculty surprised students by donning turkey costumes for their competition, inspiring many students to join in.

“The Turkey Trot is an amazing event because of all the people who contribute to its success,” Hemmerling physical education teacher Mark Pearson said. “We’re proud of all our Mustangs from kindergarten to fifth grade for their outstanding effort and sportsmanship. Also, we could not do this without our volunteer staff and community partners, who helped to contribute to its success.”

“It was amazing to see our Mustang family work together to uphold this long-standing tradition, embracing community and friendly competition,” Superintendent Terrence Davis said. “This event is a testament to what Banning Unified is all about – collaboration, unity, family and fun.”